ikhzanagi all the things that make my mind itch to review..

When I was in my brother’s room, I used his computer and explored it. At last I finally found a bunch of movie collections of his. Wondered what kind of films he had, I checked it one by one and chose one I desired to watch and what seemed I haven’t watched.
Then I found Megamind, one of the movie he collected. I directly clicked to play and get simply shocked that the film was a 3D movie. Hoped to be entertained so I watched it and tried to follow the plot. In addition, the role of Megamind who always unlucky but succeeds was successfully making the viewers laugh.

The film was about Megamind, human-like alien who try to live normally on the earth. However he found himself in the prison where the bad behaved men gather. Once he getting out from the prison, he transferred to the school together with his rival Metro. Being cowarded by Metro, Megamind decided to be a bad man. He always tries and tries to be an evil man since he got bad acceptance from his surround. Then he tricked Metro Man and killed him which is actually he doesn’t really die. The people started to disbelief him and never been smiled at the time Megamind took a control of the city. Including Roxanne, a news reporter who has close relationship with Metro Man. However, since he met Roxanne in Bernard body appearance, Megamind fell in love with her and forbade his true identity. This relationship make Megamind forgot his major destiny, “make the metro city be monstro city” a city with all of miserable life within. This also made his closest pal and loyal assistant, Minion, left him. In such an unstoppable dilemma and worst condition, Megamind decided to create his own hero who will against his evil plans. 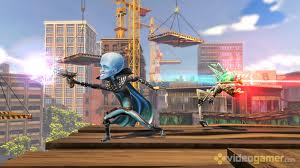 Unfortunately, when Megamind and Roxanne fought because of his fake appearance noticed up, a hero formula was shot out and laid on Hal, Roxanne’s cameraman. Therefore, Hal changed into a superhero and named himself as Titan (or maybe Tighten). His foolish acts make the city be scared and found his major destination to kill Roxanne. Megamind and Roxanne finally knew that Metro Man didn’t actually die. He just hid himself from the city because of his worry and tired to be what the people want him to be. Megamind desperately decided to send himself back to the prison. But in the outside Roxanne was being intimidated by Titan and likely to kill her soon. So Megamind got out from the prison by Minion’s help and raced to save Roxanne. Then the film was served scenes of Megamind duel with Titan which finally Megamind gained his victory. And the city finally accepted Megamind as their hero.

Over all, the film’s outstanding, especially for its entertaining aspect. Showed by how it makes the viewers smile and laugh along the film played.

Bravo for Megamind movie, I love it so much..

This entry was posted on November 4, 2012 by raden ikhwan. It was filed under Film and was tagged with 3D, entertainment, film, laugh, Megamind, metro city, metro man, movie.

Give your voice Cancel reply

No Room for Any Plagiarism

Check Your Days Out

Those Who Have Come 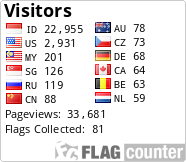